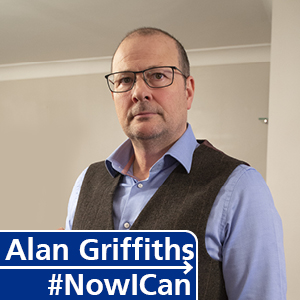 “I am supporting the #NowICan campaign, because these amazing therapy services have changed my life. After Hillsborough, I stopped going to football matches for a while and was always on edge in crowded and confined spaces. Now I can fully enjoy my passion for football once again.  I can cope with the crowds - no more nightmares, no more panicking. Like me, many people bottle things up, are worried about accepting they need help, or don’t know where to turn. This fantastic service is on our doorstop, it’s life-changing, and it’s completely free. You don’t even need to see your GP.”

Exactly 30 years after surviving the Hillsborough football stadium disaster, Alan Griffiths turned to our psychological therapy counselling service for help and is now well on the road to recovery.

The Alcester company boss admits he had bottled up the trauma of what happened at the Nottingham Forest vs Liverpool FA Cup semi-final in April 1989.

Ninety-six people died and more than 700 were injured in a crush in the Leppings Lane End of Sheffield Wednesday’s ground.

Alan and a friend had travelled to the match in Sheffield and were caught up in the crush. They were able to climb to safety over the metal barriers put up to stop members of the crowd spilling on to the pitch but hundreds of other fans – mainly Liverpool supporters – weren’t so lucky.

The two young men quickly joined the rescue operation but many of the people they were carrying away from the scene were already dead.

“It was 30 years to the day before I finally accepted I needed help. I had been in Sheffield on business earlier this year and, aware that it was the 30th anniversary of the tragedy, decided to return to the ground,” said Alan.

“I was totally unprepared for how it would make me feel. I had an emotional breakdown – I just stood outside the ground in floods of tears.

“As soon as I got home, I went to my GP who referred me to Coventry and Warwickshire’s psychological therapy service.

“I knew in my heart I wasn’t coping but didn’t really understand how it had affected me. I was bottling it up, I just couldn’t talk about what happened and struggled in situations that brought back that awful day.

“Denise, my wife, is a nurse and she had suspected I had hyper-vigilance and PTSD (post-traumatic stress disorder) but thanks to my counsellor, Andy Sgorbini, I have been able to process what happened and I finally coming to terms with it.

“It is still an awful memory but now I understand just how seriously it affected me and I feel able to move on – no more nightmares, no more sense of panic in busy rooms or crowds. It’s fantastic.”

In fact, Alan is so pleased with the way counselling has changed his life, he is now urging other survivors to seek expert help.

“I am a member of the Hillsborough Survivors’ Support Alliance and I often meet people who I know are in the same position I was in. They were there at Hillsborough but have never talked about what happened that day.

“People need to know how important it is to open up with the help of professionals. It has been life-changing for me. 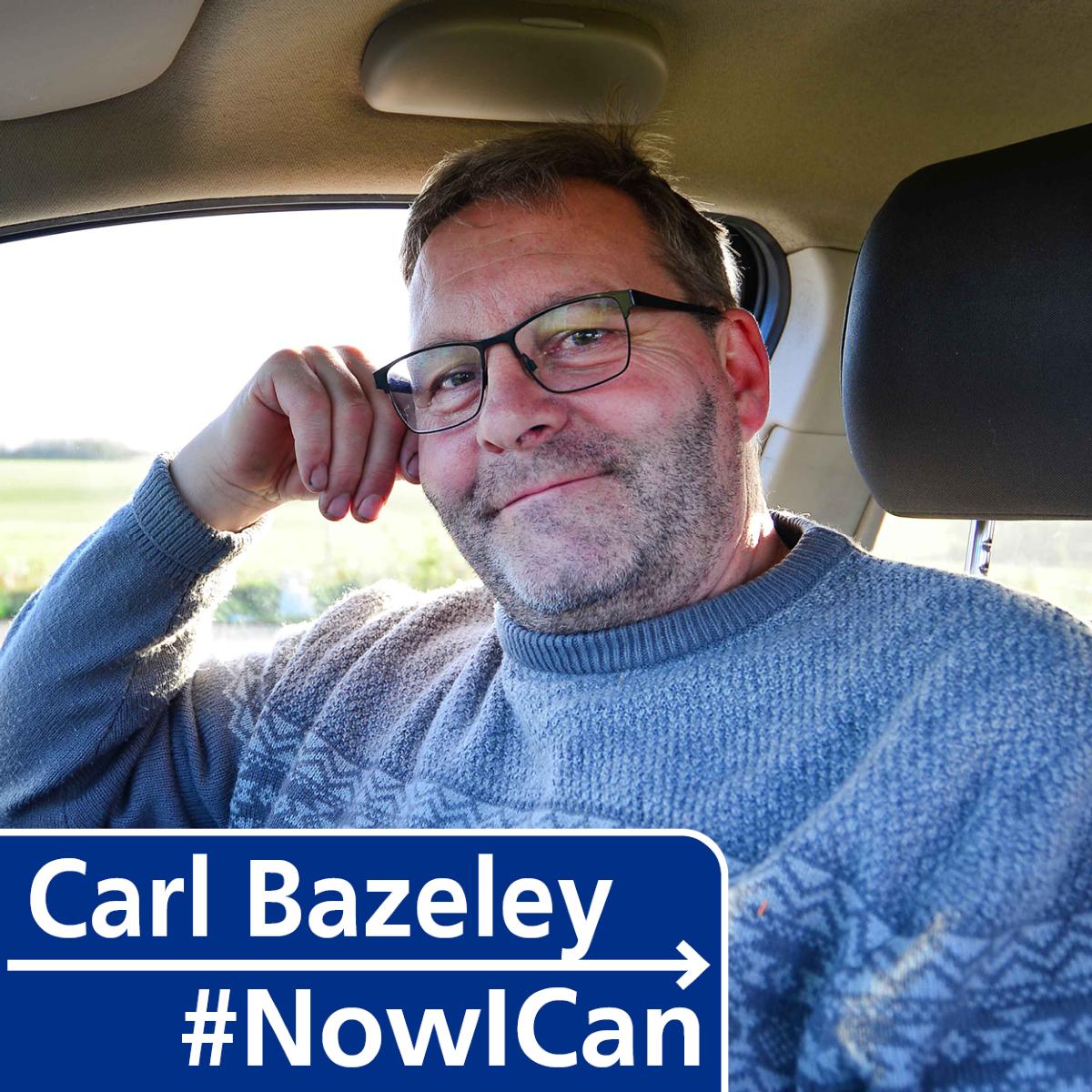 “I am supporting the #NowICan campaign because my counsellor, Chris, has helped turn my life around. By sharing my story I am hoping I can help more people to do the same. I struggled to get behind the wheel of a car because I was so traumatised by my accident, but now I can.

"Every day, Chris and his colleagues help so many people, some like me. It takes just one phone call to access these free, life-changing services, but people often don’t seek the help they need. I want to help spread the message that it’s OK not to be OK. Don’t wait and don’t suffer. Be kind to yourself and call them now - it’s that easy”

Carl Bazeley was left with a burning sense of anger after he was nearly killed by a drink driver. But he was also anxious, sometimes overwhelmed and in physical pain – so much so that he began to have suicidal thoughts.

The 54-year-old supermarket worker is now on the road to recovery after using services provided by expert therapists at Coventry and Warwickshire Partnership NHS Trust.

“My counsellor, Chris, gave me the time and the space to talk through my emotions until I understood why I felt the way I did,” he says.

Carl realised many of his feelings of guilt stemmed from the fact he had survived the accident, unlike his sister, Angela, who had been killed in a car crash in the 1980s – a drink driver was also behind the wheel of that car.

“She was 23 and married with two young children and I felt it was unfair she had died but I was still here. I hadn’t realised this until I was given the chance to talk about my life with a trained expert,” he says.

“I can’t thank my counsellor, Chris, enough. He allowed me to come to terms with how I felt about Angela’s death and how I had linked it to my own situation after the crash.

“Counselling gave me a new way of looking at life and ways to help me cope when things start to get too much. I now believe I survived for a reason and am feeling much more positive about my future.

“It has given me the strength to take back control. I am a lot more cautious when driving now but I can now get behind the wheel of a car without automatically thinking someone is going to smash into me.”

Since his crash, Carl has become a strong advocate of the anti-drink drive message.

“I now feel I have been given a second chance for a reason and am keen use my experiences to warn about the dangers of drink driving."

I am supporting the #NowICan campaign because I want people whose lives are badly affected by a loss in confidence to know that they are not alone… and to know that there are fantastic therapy services here in Coventry and Warwickshire, ready and waiting, to help get your life back on track. My wonderful therapist helped me to deal with my overwhelming sense of inadequacy, particularly at work. Because of my worries, I even lost the confidence to park my car. But now I can park again, and much more.

Problems had been building up over time for Tracey. The death of her father, divorce, and having to move home were possible triggers.

“I had an overwhelming sense of inadequacy, particularly at work. I thought whatever I did was wrong even though my boss said there were no issues with my performance,” she says.

“It built up over several months until it started having a serious impact on my daily life.

“I would find myself crying, I was often up in the early hours of the morning pacing around the kitchen.”

One example of how Tracey had lost confidence was that she would no longer reverse into a parking space, meaning she often drove much further than she needed to.

“It was ridiculous, nothing had changed that meant I could no longer park my car. I was just overthinking things and knew I had to seek help,” she says.

“I was sceptical at first but the therapy staff were really helpful. I was also glad I opted for the group sessions. It was such a diverse group – all ages and walks of life – but hearing their stories really helped me and I realised I was not alone.”

“They showed me ways to regain control and reduce negative and unhelpful thoughts.

“In fact, after a session where we had been shown breathing exercises, I drove back to work and was just about to go past bit of a tight parking space when I thought: No, I am not inadequate, I can do this – and I did.”

If you are registered with a GP in Coventry, Rugby, Warwickshire or Solihull you can refer yourself for an initial appointment or you can be referred by your GP or other health professional by telephoning 024 7667 1090. Lines are open from 9am to 4.30pm Monday to Friday. Even if you’re not sure whether you need help, we are happy to hear from you and will be able to provide you with the advice and guidance you need.